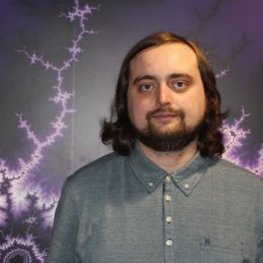 I am an Astrophysics PhD research student at the University of Central Lancashire (UClan) working in the Jeremiah Horrocks Institute (JHI). I am currently writing my PhD thesis

As a research student, I have gained experience working independently and as a team both nationally and internationally. I have attended and presented at conferences in the UK, Europe, North and South America.

Data from my research is produced from running simulations of galaxy formation on high preformance computers, typically requiring 100 CPU's and 500 GB of RAM. The results of these are analyised using a combination of analysis software that I have created in Python using single and multithreaded programming techniques (openMP). My analysis software requires the use of open source scientific libraries developed in Python (such as Numpy, SciPy, YT). Additionally I have contributed towards the scientific python library YT (See the website, http://yt-project.org/) using the version control software git. For more complex numerical tasks, I use Fortran or C to preform highly numerical calculations. The data I analyse typically consists of 1 million + data points with multidimensional infomation (position, velocity, mass etc) and I use group finding techniques to identify the regions of interest (e.g galaxies or giant molecular clouds). I then produce results, plots and finally draw conclusions from my data. Of which these results have an impact in the global scientific community.

A list of my publications is available on this page, Additionally I shall also cover briefly areas of my research.

In the past two decades, astronomers have become increasingly interested towards the study of the nature, formation and evolution of galaxies. With the aid of new observational techniques and measurements, astrophysicists have been able to improve the constraints on theoretical cosmological models. The most widely accepted standard model of cosmology is the LAMBDACDM model, also known as the Standard Model of Cosmology

The primary focus of my research is on understanding the evolutionary processes in a galaxy. I have been investigating the feedback processes in galactic evolution, chemical evolution, and gas disk instabilities which form giant molecular clouds. I have also briefly investigated the properties of cosmological voids. 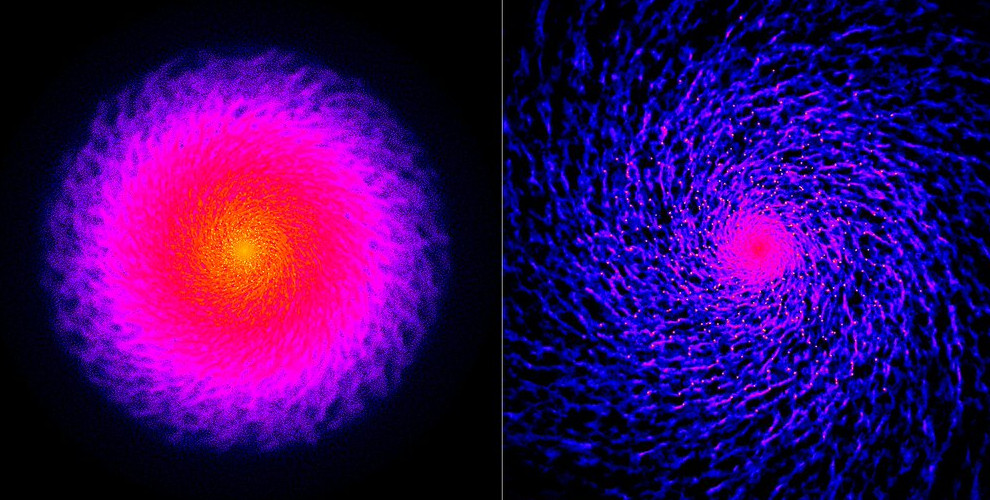 A visualisation of gas and the formation of giant molecular clouds in an isolated Milky Way-like galaxy simulation.

We live in a Galaxy called the Milky Way. Like many other galaxies in the universe, it is a system consisting of a cold gas disk and stars in the gas disk and central bulge of the galaxy (and sometimes a super massive blackhole at the centre) all of which is held together by gravity. Of which the dark matter halo which hosts the galaxy provides the most mass, and thus gravity to hold the system. Dark matter halos are typically 5 times the mass of the combined mass of stars and gas in our own galaxy. Galaxies also come in different shapes, sizes and masses of which the most common are elliptical galaxies (older, red, metal poor) and spiral (disk) galaxies (younger, bluer, metal rich).

One of the fundamental science questions driving billion-pound technology investments such as the European Space Agency's Gaia mission or the International Square Kilometer Array surrounds our attempts to untangle the complex physics driving the formation of galaxies. Within our own Milky Way, the question remains equally controversial, yet even more focussed; specifically, how did the Milky Way's Galactic disk form and evolve, and is it even correct to consider it as a singular disk, or does it possess multiple components (and, if so, what drives their individual formation and evolution?)?

Within the galactic disk, giant molecular clouds form from the density pertubations of the gas disk itself. Giant Molecular Clouds and dense regions of gas are primary regions of star formation. Stars are formed by the collapse by the gravitational collapse of gas. The gas that fuels the star is burned via nuclear fusion reactions which typically involve the fusion of hydrogen. The nuclear fusion reacion creates an outward pressure force that prevents the star from collapsing under gravity Once the star burns through it's nuclear fusion fuel, it collapses under it's own gravity. This gravitational collapse is countered by the atomic nuclei forces which counter the collapse with a strong pressure force, which creates a supernova explosion. Depending on the mass of the star, a white dwarf, neutron star or black hole is left behind as a supernova renement. Supernova explosions inject various elements into the intergalactic medium.

Supernova explosions are one of the causes of galactic gas outflows, but additionally so are disk instabilities Galaxy outflows occur in rapidly star-forming galaxies of all masses. They play a central roll in the history of galaxy formation (e.g Scannapieco et al. 2001) They are needed to reconcile the number density of observed galaxies in favoured cosmological model and they are essential to the enrichment of the intergalactic medium Yet, despite the central importance of galaxy outflows, the processes that control their evolution are extremly difficult to constrain both theoretically and observationally.

In simulations, these feedback mechanisms are typically parameterised by several independent variables. Varying any of these parameters will have an impact on your galaxy model. For example, reducing the star formation efficiency and you will in turn reduce the efficiency of supernova, thus reducing the metal abundance of a galaxy (when the initial implied effect would be the production of fewer stars). Due to the multivariable nature, galaxy formation simulations are complex. Additionally galaxy formation simulations are limited by resolution (there are over 10 Billion stars in our galaxy, and galaxy simulations are typically in the order of 1-10 Million star "particles"). 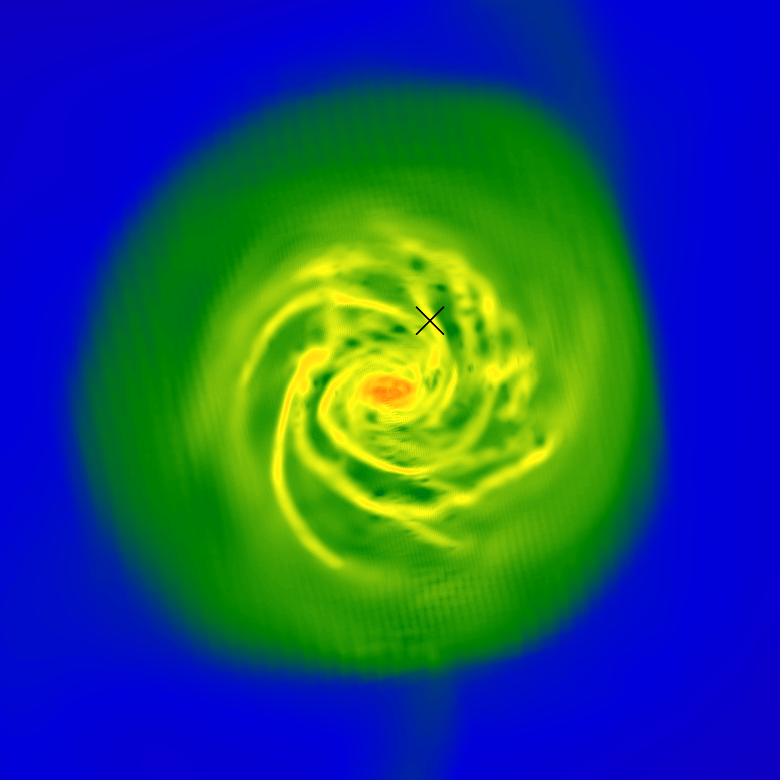 Simulated Milky Way-like galaxy with chemical evolution. The X marks the equivelent region of the solar neighbourhood in the galaxy.

Galactic chemical evolution is the process of which the elemental abundance ratios in a galaxy change with time. Initially the elemental abundance of a galaxy is initially similar to the primordial abundances of Hydrogen and Helium (i.e the same ratio of Hydrogen and Helium that is produced in the Big Bang). However as the galaxy evolves, stars are formed which takes hydrogen (and other elements) out of the intergalactic medium, and locks these elements away until the star releases them (and other elements produced from nuclear fusion) via a supernova explosion. This process causes the elemental abudance ratio of the galaxy to change.

Galactic Archaeology is the study of Galactic activity of the past. Since stars that are born in the same region of space (i.e the same nebulae or giant molecular cloud) have a similar chemical abundance. We can infer where the star forms and using the kinematics of the star, we can calculate how old the star is. Simulations of galactic chemical evolution, in addition to observational surveys generating kinematic data (the GAIA survey) and chemical abundance data (the Gaia-ESO survey), it is possible to trace the origins and evolutions of stars within our galaxy, and the history of our own galaxy itself (e.g identify rapid periods of star formation from the merger of a galaxy). Every star has it's own unique chemical fingerprint, which can be used to piece together the history of our own galaxy.

Additionally with my PhD, I have worked on numerical methods to predict the abundance of metals within the "solar neighbourhood" (the region of space relatively near the sun). Using stellar evolution models, I treat star particles (with a mass a factor of 100,000 greater than the sun) as though they are clusters of stars with similar overall properties. Using stellar evolution models, I treat each individual star particle as a population of 100,000 stars and generate photometric properties of the stars from that of a simulated observer. It is thus possible to compare a "simulated observation" within a simulated galaxy of similar mass and evolution history of the Milky Way, with a real observation survey such as the Gaia-ESO survey. 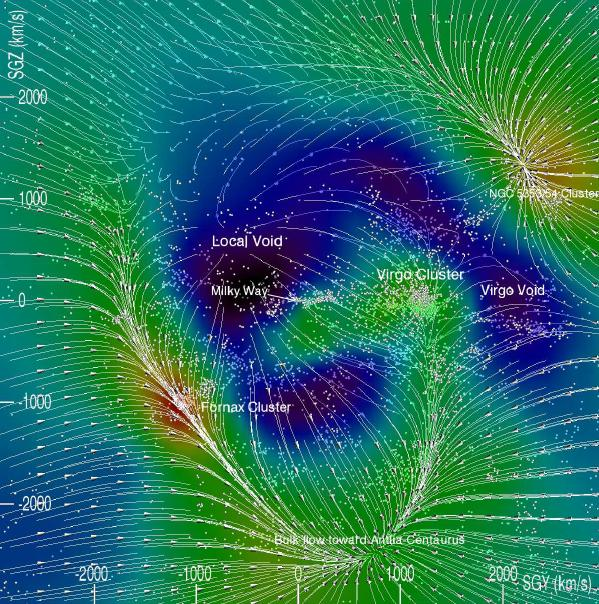 Voids offer the opportunity to probe the small scales of the primordial power spectrum and the early development of medium scale density fluctuations. Growth of primordial fluctuations occurs at a slower rate and continues in linear and semi-linear regimes for a greater amount of time than the over-dense regions, in which the density fluctuations are compressed due to gravitational collapse. This gives us the opportunity to investigate the power spectrum on small scales and thus the current known problems with the standard model of cosmology.

Void galaxies are found to be in a more youthful state of star formation. Compared to other regions in the universe, void galaxies are more likely to be bluer, have a later morphological type and have higher specific star formation rates per stellar mass than galaxies in average density environments. Void galaxies seem to be comparable to the blue faint end of a normal galaxy distribution